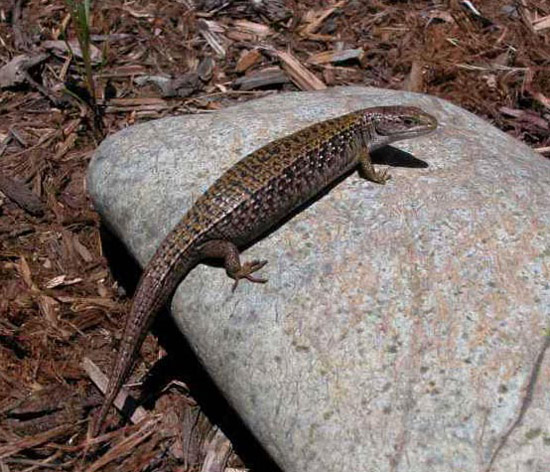 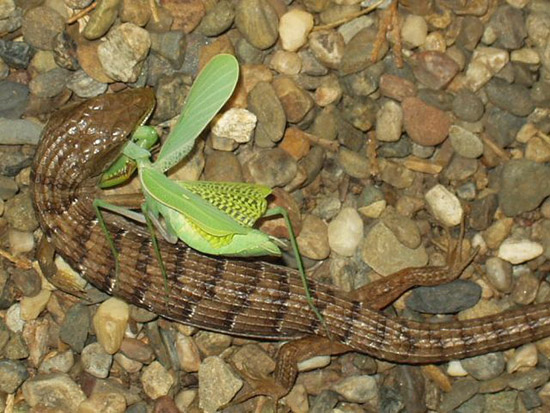 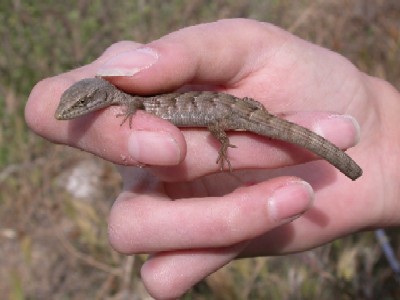 As its common name suggests, the northern alligator lizard looks a little like a miniature alligator. Its temperament, however, is quite different. These lizards are not as fast or aggressive as some other lizard species, and they are likely to run and hide in response to the slightest disturbance. They do bask in the open, but always near a hiding place and otherwise prefer to stay under cover. They are harmless to humans, although they can bite if attacked or touched. They can clamp down with strong beak-like jaws, releasing only when the hold on them is loosened.

The northern alligator lizard’s body is covered in rough scales on the back and smooth scales on the underside. A visible fold of skin separates the back and belly on both sides. This extra skin is an adaptation that lets the lizard’s body expand for breathing, feeding, and reproduction. This lizard is typically deep brown or tan with dark blotches that often tend to form bands. This coloring, coupled with a pale gray belly, helps the lizard blend in with many natural backgrounds. Its head is triangular, with a pointed snout and highly pigmented brown eyes. Legs are short, ending in five pointed toes.

Arid, semi-arid, and often rocky areas, grasslands, woodlands or along forest edges with debris such as leaves, bark, rotting logs, or talus near creeks, ponds, or lakes.

Range: Canadian and US Pacific Ocean coast from southern British Columbia to central California, from sea level to 11,000 ft (3350 m).

Conservation Status: None. The species is not well documented, and exact figures of population and distribution are unavailable.

Northern alligator lizards hibernate in underground burrows, and in cooler regions, stay near their burrows all year. Mating season is in spring, when the lizard comes out of hibernation. Young develop inside the mother’s body and are born live. Expectant mothers must forage and bask more than usual, which exposes them to predators. A single litter can range from two to 15 lizards. Newborn lizards are fully formed and immediately independent.

Though males mate every year, females usually mate every other year because they need time to replenish their fat reserves. These lizards usually bask in groups, although individuals don’t interact much. The northern alligator lizard can lose its tail and regenerate it, and uses this technique to distract predators. The tail contains fat reserves important to the animal, and re-growing it takes additional resources, but the defense mechanism is often effective.