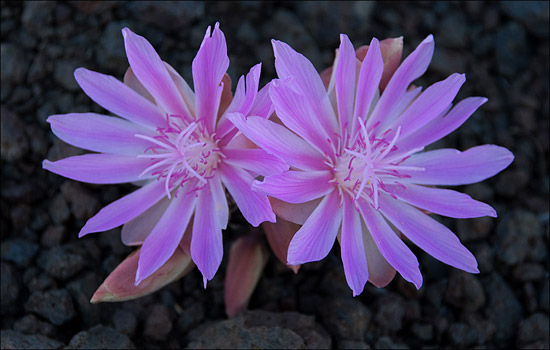 In 1893 the state of Montana sent bitterroot to the World's Columbian Exposition, and it became the official state flower in 1895. Low-growing bitterroot prefers cool weather. The open, cup-shaped flowers range from white to pink with up to 18 narrow petals, six to eight sepals, and multiple stamens. Each petal is about an inch long, and each flower grows on a short stem. The leaves are succulent and grow directly out of the ground in a rosette formation, usually dying back as the plant comes into bloom.

The stems are also short, about an inch longer than the leaves, and each produces one flower. The flowers appear in late spring or early summer, closing at night and reopening with the morning sun. The seed vessel is a capsule, .2 inches (5–6 mm) long that holds dark, shiny seeds. The plant is very drought-tolerant and can survive for more than a year without water. It is distributed from southern British Columbia east to Montana and south to southern California and northern Arizona. This perennial herbaceous plant grows mostly on foothill slopes or mountain valleys.