Coal is a combustible black or brownish-black sedimentary rock composed mostly of carbon and hydrocarbons. It is the most abundant fossil fuel produced in the United States.

For millions of years, a layer of dead plants at the bottom of the swamps was covered by layers of water and dirt, trapping the energy of the dead plants. The heat and pressure from the top layers helped the plant remains turn into what we today call coal. Three images showing how coal was formed. The first image is of a swamp, 300 million years ago. Before the dinosaurs, many giant plants died in swamps. The second image is of water, 100 million years ago. Over millions of years, these plants were buried under water and dirt. The third image is of rocks and dirt over the coal. Heat and pressure turned the dead plants into coal.

Coal is classified into four main types, or ranks (anthracite, bituminous, subbituminous, and lignite), depending on the amounts and types of carbon it contains and on the amount of heat energy it can produce. The rank of a deposit of coal depends on the pressure and heat acting on the plant debris as it sank deeper and deeper over millions of years. For the most part, the higher ranks of coal contain more heat-producing energy.

Anthracite contains 86-97% carbon, and generally has a heating value slightly higher than bituminous coal. It accounts for less than 0.5% of the coal mined in the United States.

All of the anthracite mines in the United States are located in northeastern Pennsylvania.

West Virginia, Kentucky, and Pennsylvania are the largest producers of bituminous coal.

Wyoming is the leading source of subbituminous coal.

Lignite is the lowest rank of coal with the lowest energy content. Lignite coal deposits tend to be relatively young coal deposits that were not subjected to extreme heat or pressure, containing 25%-35% carbon. Lignite is crumbly and has high moisture content. There are 19 lignite mines in the United States, producing about 7% of U.S. coal.

Most lignite is mined in Texas and North Dakota. Lignite is mainly burned at power plants to generate electricity.

Coal miners use giant machines to remove coal from the ground. They use two methods: surface or underground mining. Many U.S. coal beds are very near the ground's surface, and about two-thirds of coal production comes from surface mines. Modern mining methods allow us to easily reach most of our coal reserves. Due to growth in surface mining and improved mining technology, the amount of coal produced by one miner in one hour has more than tripled since 1978. 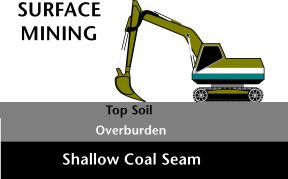 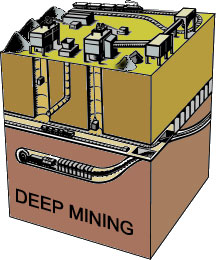 In surface mining, giant machines remove the top soil and layers of rock known as "overburden" to expose the coal seam. Once the mining is finished, the dirt and rock are returned to the pit, the topsoil is replaced, and the area is replanted.

Underground mining, sometimes called deep mining, is used when the coal is buried several hundred feet below the surface. Some underground mines are 1,000 feet deep. To remove coal in these underground mines, miners ride elevators down deep mine shafts where they run machines that dig out the coal.

After coal comes out of the ground, it typically goes on a conveyor belt to a preparation plant that is located at the mining site. The plant cleans and processes coal to remove other rocks and dirt, ash, sulfur, and unwanted materials, increasing the heating value of the coal.

After coal is mined and processed, it is ready to be shipped to market. The cost of shipping coal can cost more than the cost of mining it.

About 71% of coal in the United States is transported, for at least part of its trip to market, by train. Coal can also be transported by barge, ship, truck, and even pipeline.

It is often cheaper to transport coal on river barges, but barges cannot take coal everywhere that it needs to go. If the coal will be used near the coal mine, it can be moved by trucks and conveyors. Coal can also be crushed, mixed with water, and sent through a "slurry" pipeline. Sometimes, coal-fired electric power plants are built near coal mines to lower transportation costs.

Where We Get Coal

Coal production is the amount of coal that is mined and sent to market. In 2008, the amount of coal produced at U.S. coal mines was 1,171.8 million short tons. Coal is mined in 26 States. Wyoming mines the most coal, followed by West Virginia, Kentucky, Pennsylvania, and Texas. 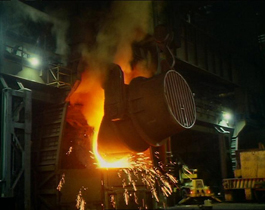 Almost 93% of the coal used in the United States is used for generating electricity. Except for a small amount of exports, the rest of the coal is used as a basic energy source in many industries including steel, cement, and paper. The major uses of coal are:

Coal is used to create almost half of all electricity generated in the United States. Power plants burn coal to make steam. The steam turns turbines (machines for generating rotary mechanical power) that generate electricity.

In addition to companies in the electric power sector, industries and businesses with their own power plants use coal to generate electricity.

A variety of industries use coal's heat and by-products. Separated ingredients of coal (such as methanol and ethylene) are used in making plastics, tar, synthetic fibers, fertilizers, and medicines.

Coal is also used to make steel. Coal is baked in hot furnaces to make coke, which is used to smelt iron ore into iron needed for making steel. It is the very high temperatures created from the use of coke that gives steel the strength and flexibility for things like bridges, buildings, and automobiles.

The concrete and paper industries also use large amounts of coal.

Coal and the Environment

Environmental laws and modern technologies have greatly reduced the impact on the environment from the production and consumption of coal.

What Are Some Environmental Concerns In Coal Mining?

Without proper care, mining can have a negative impact on ecosystems and water quality and alter landscapes and scenic views. Debris that chokes mountain streams can result from surface mining like mountaintop removal, and acidic water can drain from abandoned underground mines.

Today restoring the land damaged by surface mining is an important part of the mining process. Because mining activities often come into contact with water resources, coal producers must also go to great efforts to prevent damage to ground and surface waters.

What Emissions and Byproducts Are Produced from Burning Coal?

The combustion of coal produces several types of emissions that adversely affect the environment. The five principal emissions associated with coal consumption in the energy sector are:

Reducing the Impacts of Coal Use

The Clean Air Act and the Clean Water Act require industries to reduce pollutants released into the air and the water.

Industry has found several ways to reduce sulfur, nitrogen oxides (NOx), and other impurities from coal. They have found more effective ways of cleaning coal after it is mined, and coal consumers have shifted towards greater use of low sulfur coal.

Power plants use flue gas desulfurization equipment, also known as "scrubbers," to clean sulfur from the smoke before it leaves their smokestacks. In addition, industry and government have cooperated to develop technologies that can remove impurities from coal or that make coal more energy-efficient so less needs to be burned.

Research is underway to address emissions of carbon dioxide from coal combustion. Carbon capture separates CO2 from emissions sources and recovers it in a concentrated stream. The CO2 can then be sequestered, which puts CO2 into storage, possibly underground, in such a way that it will remain there permanently.

Reuse and recycling can also diminish coal’s environmental impact. Land that was previously used for coal mining can be reclaimed for uses like airports, landfills, and golf courses. Waste products can also be captured by scrubbers to produce synthetic gypsum for wallboard.

Source: Energy Information Administration of the U.S. Department of Energy.